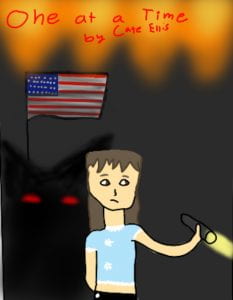 About six months ago we started working with a write named Frances Dowell. If you don’t know who Frances Dowell is, that’s okay. Frances Dowell is a writer who has been awarded many awards for her writing. She even has her own website (right below my cover).

I learned from Frances Dowell that I write about my surroundings in the story really well. So I tried to focus on that and try to focus other parts of my story like dialogue and tying in the characters more. I really didn’t know how to start my story until Frances Dowell told us how to. I would have just written a really boring opening scene and nobody would want to read my story even though it gets better when you get deeper into it.

I read parts of my story to my mom and she gave me some advice to fix some of my dialogue. It was really helpful to hear those words because after that I realized my dialogue was just very bland and not interesting in the least. I also read another part to my sister and she told me I should not make her have a dead sister, which wasn’t very helpful. And Frances Dowell, like I said up top, said I write about the backgrounds really well so I tried to focus on what my mom said.

I feel proud of myself but I think I could have done better. I only wrote around 26 pages and I really think I could have wrote more if I really focused on writing my story really well. I do feel proud of myself for focusing on the dialogue and throwing curve balls at the readers. I think I will continue to write more stories, one of my friends gave me a good idea and I’m going to try and practice writing with that story idea.

I feel pretty good about my story, maybe I should edit it a little more. But other than that I don’t have any concerns about my story.